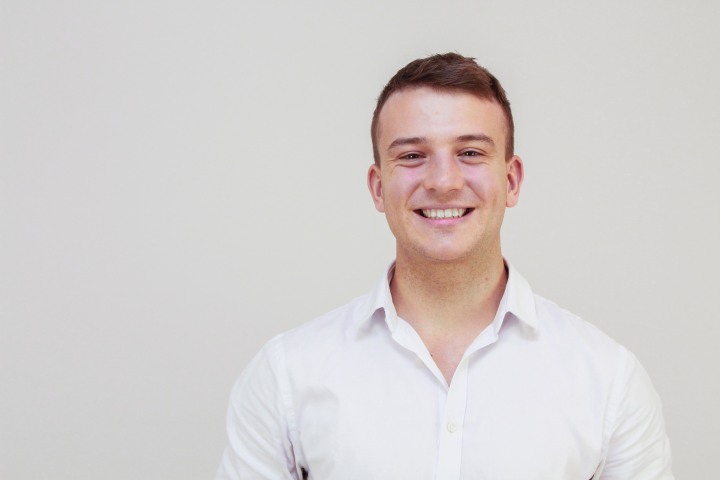 Twenty-three-year-old commercial real estate agent Saxon Smith might be wise way beyond his years, but this fiery go-getter is unstoppable in building more personal goals and achieving them one by one.

Hey Paolo: How did you start your career in commercial real estate?

Typically, most people who are in the real estate industry would have a parent or family member doing the same — it’s very niche!

The difference for me was that I was previously running my own marketing business and I was servicing McGees Property (commercial property services company) as one of my clients. They eventually offered me to work for them full-time while helping them on their digital marketing and social media. From social media marketing, I then jumped and got interested in doing property sales.

I love my job and it’s the best job in the world. I can rock up to work whenever I want and I can also leave whenever. There’s also flexibility in income and it’s commission-based. If you work hard, you’ll get paid more. If you slack a bit, then you don’t get paid much. There’s a lot of glamour involved too. If you’re known as the best agent, people will know who you are. It’s very competitive which is almost like a sport.

It varies in different sectors. For retail properties at present, these property owners are struggling to fill up their shops as things are becoming more and more online. A lot of businesses no longer need physical shops and therefore, they no longer need to pay rents. But for industrial properties like warehouses, that’s booming at the moment. People still often need these spaces to store goods and for distribution. The demand for office buildings in the city, they are pretty much the same.

Hey Paolo: Where do you see commercial properties in SA progressing in the future?

With the COVID-19 situation we’re all in, people are getting more accustomed to staying and working from home. It might have two different effects though. For some, it can cause a greater push for people to go out, to visit restaurants, and to shop more outside because they’ve missed doing these activities. But for some who get so accustomed to staying at home, they might realize that they don’t really need any physical shops as they can just do things online. Unfortunately, this might cause a decrease in demand for commercial shops over time.

During times like these, co-working spaces might also suffer at the moment because some might get worried of sharing space with a dozen other people. On the positive side, the industry where we see real growth will be in industrial/warehousing.

Hey Paolo: What are the up-and-coming commercial hotspots in South Australia?

I really like the western areas such as Thebarton, Hindmarsh, and Ridleyton because these properties are close to the city, they’re well-priced, and they’ve got a lot of flexible uses such as warehousing, commercial shops, offices, and even churches. They’re very flexible with what you have and what you can do with them.

Other areas such as Hyde Park, King William Road, The Parade, and all these inner-Adelaide suburbs surrounding the city are pretty good too. I’ll be also looking at Forrestville and Wayville which are in the south of the city as there will be tons of developments here in the pipeline such as shopping malls.

Hey Paolo: What keeps you busy outside work?

I love exercising and lifting weights at least 5-6x a week. I go to Goodlife Health Clubs Cross Roads.

I also love starting new businesses. I have a signage business on the side and it’s called Signergy Australia. We do all kinds of signages such as illuminated signages, LEDs, printed signages, decals, etc. We found that the most popular ones at the moment are the neons. So we created a sub-business called The Neon Event which exclusively deals with neon signages.

Hey Paolo: What are your top recommendations in South Australia for…

Coffee: I like going to Argo on the Parade (Norwood), Sublime Cafe (Clarence Park), and Mister Sunshine’s (Thebarton).

Dining: I like Ying Chow Chinese Restaurant (Gouger Street, Adelaide) as it has good food, people are always lovely, and they’re affordable. I also like Melt Henley (Henley Beach) for their pizzas and they’ve got a really good spot at Henley Square.

Nightlife: I love going to 2KW.

Beach: I reckon Adelaide has some of the best beaches in the world. Port Noarlunga, Maslin Beach, and Second Valley are beautiful.

Hey Paolo: If you’re not in your profession now, what kind of job will you be in?

Running a business of some sort. I’ve got a few businesses at present and I was also previously running a marketing company for a few years. I’ll probably be doing that again.

Hey Paolo: Once the COVID-19 situation and home isolations are over, what would you like to do again?

Go to a cafe and catch up with some mates. And probably go to the gym too!

Hey Paolo: What do you love most about South Australia?

I think the weather here is great. I love how it’s easy to get from one side of the city to the other and it can only take you ten minutes. I love the beaches here too.