Everyone deserves to be celebrated. And I’m here to narrate everyone unique life story.

Young South Australian content creators, Linda Huynh and Alex Huynh, found their own niche on Tiktok while entertaining over two hundred thousand of their followers from all corners of the world. Hey Paolo: What inspired you to start producing creative content on Tiktok? Linda: We discovered Tiktok two years ago. I first uploaded a Tiktok […]

For most people, the Tiktok world is seen as nothing but pure novelty. But for South Australian content creators, Jaxon Samwell (17) and Tommy Eyers (23), Tiktok goes beyond novelty — it’s a new medium of creative, engaging, and out-of-the-box entertainment. Hey Paolo: What inspired you to start your Tiktok pages? Jaxon: Six months ago, […]

ROCKIN’ UP WITH THE ROCCAS — More than the fight for legal rights, acceptance, and equality, marriage for David Rocca (34; videographer/content creator ) and Adam Rocca (26; real estate agent) is nothing but a celebration of union and love.  Hey Paolo: What were your individual “coming out” stories like? David: I was a late […]

Radio, as a communication medium, has undeniably evolved over the years. With a new batch of talented and passionate people who constantly aspire to share their voices, knowledge, and stories to world, radio will always have a place among people. 5EBI 103.1 FM’s Juan Paolo Legaspi, 33, shares his radio journey story.  Hey Paolo: How […]

They often say, “real queens fix each other’s crowns.” For Matthew Bruno, 35, he might have learned his lessons the hard way, but he is now ready to push himself once again to return to the scene and to bring his fab alter ego, Shania Twatt, back on track.  Hey Paolo: What inspired you to become […]

Want to enjoy a luxurious and relaxing spa environment in the comfort of your own home? Luke Van Boekel, 24, of Odyssey Health Practices Adelaide provides mobile massage therapy services to help pamper and ease tensions in your tired bodies without you necessarily leaving your own bedroom.  Hey Paolo: Why massage therapy? I have always […]

Clothes might arguably make the man — but practically speaking, stripping off any possible facades also make the man true and authentic. Chatted with fitness trainer, adult entertainer, and one of Adelaide’s very own Magic Mike, William Gargula, 25, about the misconceptions and ins-and-outs of this tempting and rousing adult entertainment industry.   Hey Paolo: What […]

If you think having a single puppy at home is already hard work, you have to meet Claire Peterson of The Little Animal Co. Growing up with pythons, alpacas, emus, among many others, Claire has her heart firmly set ever since she was a kid to raise, rescue, and love animals and to also give them […]

From the savoury Adobo (pork/chicken stew) to the trendy Ube dessert, the humble and unassuming Philippine cuisine is always catalpulted by foodies as the next Asian rising star. We chatted with John Viojan, owner of The Filipino Project in Adelaide, about his growing food business and how he flirts the international palettes of South Australians. Hey […]

With an impressive resume and colourful history, Dr. William Peterson’s professional body of work is as colorful and rich as his personal life story. Born and raised in America, he has worked and lived in various parts of the world but eventually landed here in Adelaide where he discovered his newfound “home away from home” while […]

Beer and wine are traditionally everyone’s most popular liquor of choice, but undeniably, there’s an emerging contender in the alcohol scene: gin. Yes, gin is fast becoming the new black. In Australia alone, there are over 170 gin distillers operating in the market. Here in South Australia, another local distiller, Adelaide Gin, is ready to […]

Knowing your purpose and setting personal goals might be the obvious pillars of “Peak Performance,” but for 19-year-old marketer, video creator, entrepreneur, and Peak Performance advocate Austin Lovell, the real challenge is applying these learnings consistently and conscientiously in your every day life. Hey Paolo: What inspired you to become to a “Peak Performance” advocate […]

Some might argue that there seems to be a surplus of personal trainers in a heavily contested fitness marketplace such as Adelaide. But for Goodlife Health Clubs Cross Roads personal trainer Jesse Curkpatrick, one must discover his/her fitness niche as a training coach in order to survive in such a cutthroat industry. Hey Paolo: What […]

While the entire world is battling an ongoing pandemic, modern day heroes have emerged especially in the field of health and wellness. They continue rising to the challenge as community frontliners with their hearts and souls exposed to the harshness brought about by this cruel virus. Behind the layers of personal protective equipment (PPE) that […]

If you’re searching for premium gift items to buy not only for your loved ones but also as a personal treat for yourself, Lunch Bunch Edible Bouquets might be the perfect alternative shop for you. Whether you’re looking for chocolate bouquets, meat & cheese bouquets, veggie & fruit bouquets, and even protein balls bouquets, Lunch […]

Ever fancied joining the random fun bunch of people always riding that peculiarly cool, eye-catchy, and ubiquitous “bar on wheels” roaming the streets of Adelaide? If you’ve always been envious to hop on it, then it’s time to join the fun. Meet The HandleBar’s General Manager Thomas Watson (29) as he shares the story behind […]

The world-renowned South Australian wine region of Barossa Valley will probably never run short of award-winning premium wine suppliers, but the real challenge is how to create a sustainable business model most especially in this ever-evolving times. Hentley Farm’s National Brand Ambassador Angus Heida gives us a peek into today’s wine industry and shares with […]

Need some fashion inspiration? Adelaide stylista Adrian Picca got us all fashionably covered from head to foot. Hey Paolo: Describe your personal style I enjoy a variety of looks. I really love the elegant, classy, and sophisticated style — all suited up, as it also somehow conveys power. I also enjoy rocking the smart, casual, […]

From the Wonderwalls of Port Adelaide to the remarkable Sia Furler mural in the West End, award-winning visual artist Jasmine Crisp, 25, contributes nothing but ingenious and progressive creations to the evolving South Australian art scene. Born and raised in Adelaide, Jasmine has attended residencies at the Praxis ARTSPACE, Carclew, and overseas (in Finland and […]

Twenty-three-year-old commercial real estate agent Saxon Smith might be wise way beyond his years, but this fiery go-getter is unstoppable in building more personal goals and achieving them one by one. Hey Paolo: How did you start your career in commercial real estate? Typically, most people who are in the real estate industry would have […]

Armed with the right amount of passion and skills, 27-year-old Rodrigo Santos braved the South Australian waters to bring his love for cooking to the Aussie tables. This Brazilian chap moved from his hometown, Caxias do Sul (southern Brazil), to Adelaide back in 2018 and now works as a Junior Sous Chef at the highly […]

Twenty-year-old petroleum engineering student, Antonio Castiglia, discovered his sexy confidence two years ago when he first seriously got into weight training. Now, he is all geared up to rock 2020 with a solid determination in achieving his new fitness goals. Hey Paolo: What Keeps You Busy These Days? I spend most of my time at […]

“There are only two moments in life when you feel most alive: when you’re happy and when you’re sad. People tend to eat cakes in either moment,” says 31-year-old Pulse Patiserie owner/co-founder Ernie Lim.  With a penchant for anything stylish, luxurious, and delicious, Ernie’s background is primarily rooted in two passion pillars: culinary and fashion. After completing his university degree in Hotel, […]

Albert Einstein once said: “If you can’t explain it simply, you don’t understand it well enough.” For over many decades, angel intuitive, life coach, and psychic Audrey Andrea, 50, has faced strong skepticisms with regard to her special mystical abilities: psychic reading, hearing angels, and seeing spirits. Rather than stopping at an early age when she first had these […]

True greatness lies in finding and appreciating radiance in others. Each person is amazing in his or her own little way, owning a unique luster. By recognizing and celebrating everyone’s uniqueness, you naturally become a bigger and better person. That is what Gawad Sulo Foundation Singapore is all about. Now on its second year, Gawad Sulo […]

British writer Rowena “Frog” Michaels moved to Asia’s most exciting culinary melting pot from Europe almost a decade ago together with her Singaporean-Caucasian husband (Simon Michael). Following their relocation, Frog has since employed and lived with Filipina helpers who look after their home — from as simple as preparing what should be served daily at the dinner […]

RISE TO THE TOP

Working in the hotel industry may seem like it’s all glitz and glam. But for someone who has spent almost two decades in this line of work, it also takes guts and passion to stay afloat in the business — and more so — to rise to the top. Mico Calubayan, Sales and Marketing Director of the newly-opened Mercure Singapore Bugis Hotel,shares […]

With over 180,000 Filipinos living/working in Singapore and contributing a billion of US dollars worth of cash remittances to the Philippines last year (one of the highest globally based on 2016 data), the country is undeniably an important partner for the Philippines. ForPhilippine Ambassador to Singapore, Antonio Morales, this serves as an opportunity to strengthen ties between the Little Red Dot and […]

Dance, similar to acting, requires a certain degree of theatrics and enigmatic character portrayals. You can be a jovial mascot dancing to some novelty songs today, and easily be a Mr. Debonair dancing to lyrical jazz the next day. For Ralph Pacayra (30), working as a full-time performer at the Universal Studios Singapore (USS) and heading the Filipino […]

For this Surigao-born lad who grew up collecting local fashion magazines, little did he know he will eventually dress and style some of the biggest stars in the entertainment and fashion industry today. Having worked with the likes of Piolo Pascual, Sam Milby, Raymond Gutierrez, Janice and Gelli de Belen, among many others, Paul dela Merced […]

With a massive following on his personal Instagram page (almost 50,000 followers as of publication date of this blog post), Jonathan Ventura, 36, is popularly known as Mr. Perfect Body: the guy who regularly flaunts his six-packs (and sometimes eight!) on social media for everyone’s delight or inspiration (depending on how you perceive it). He has joined eight bodybuilding competitions in Singapore and has won […]

Trading their corporate jobs and shifting their focus to a full-time business that was once just a hobby was undeniably a daunting career leap — but for Timothy (Singaporean, 32 years old) and Yuyeth (Filipino, 34 years old) of “Bows and Ribbons Photography,” it was a risk worth taking. After 120+ photo shoots since they started, these newborn baby photographers […]

BEST OF BOTH WORLDS — ERR, UNIVERSES RATHER

How often do you hear compelling stories that involve the Philippines and Colombia? Aside from reminding ourselves of the controversial scramble over the 2015 Miss Universe crown — in fact, there aren’t that many remarkable Fil-Colombian stories. In the case of Ricardo (also known as Ricky; 36) and Erika (35), Singapore was the ultimate reason why their paths crossed. Who knew how […]

Anthony John Abril Garcia, whose family hails from San Pablo, Laguna,was part of the early wave of Filipino migrants in Singapore back in the ’90s. He was only seven then when they moved. Now at 26 and a Singaporean citizen, Anthony works as an IT executive and his income helps fund the schooling of her 20-year-old sister. Winning the 2016 […]

Restaurant manager and model Janina Espinoza has all it takes to rise above the rest. After winning Singapore’s Dream Top Model 2016 competition, Janina started pursuing her dreams gracing various community events, photo shoots, and even auditioning for Asia’s Next Top Model. Weeks before she crowns her Dream Top Model successor, she narrates to us her personal stories — […] 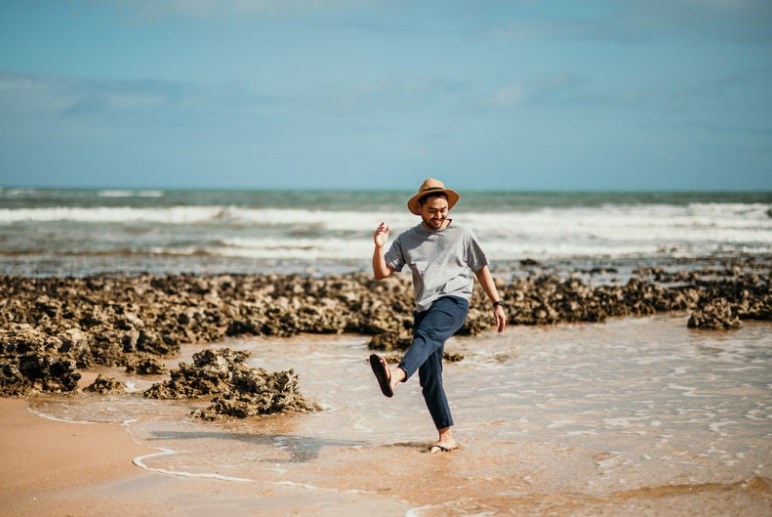